Search
Home
BLOG
On many occasions, and not just into the whisky world, you will hear the words « it was so much better before ». Sometimes, it is a proven fact. Like the mills the Porteus company used to make : they were so good that no one ever needed another, and the company had to close its doors.
But in other cases, you might think that people are just nostalgic, and want to believe that in ancient times things were better (as they may only have been simpler).
So when Iain Dick asked me if I wanted to participate in an epic tasting of Highland Park 12 yo (plus a mistery dram) spanning from the 80s to the 2017 newest release…well, I bet you know the answer I gave him 😜
Here is how the night was arranged : we had six drams in front of us. We knew there was 5 Highland Park 12yo and one mystery dram. The 12yo were 1 of each : 1980, 1990, 2000, 2010 (spanning between 2009-2016) and the newest one, 2017 Viking Scars.
We had no idea which were which as they were in label-free bottles. Even our host had no idea. Someone from outside provided us with a sheet saying which bottle was what, and no one among us had looked over to cheat. 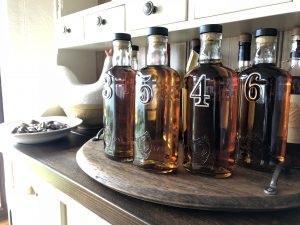 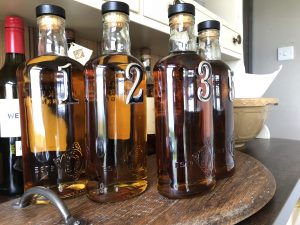 As you can see on the sheet below, we first started with a nosing of the whiskies and then discussed what we tough. Then, we had a first taste followed by a discussion, and a second taste again followed by another discussion.
As I tried to guess what dram were what, I went « scientific » an took notes, wanting to compare whiskies together and trying to see if there was a pattern. 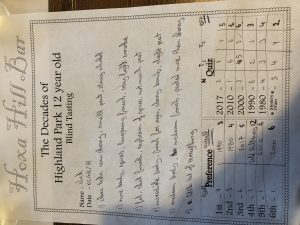 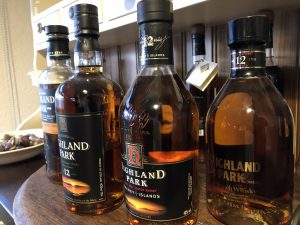 A contemplation of the evolution of Highland Park 12yo
6Reader’s review
Reader Rating: (5 Votes)
6.0