Aged in ex-sherry casks, though not specifically mentioned

The Royal National Lifeboat Institution, RNLI, built its first station on Orkney in 1867 in Stromness (Orkney’s second largest city). Its mission is to answer 24/7 calls of boats needing rescue in the great, powerful and dangerous ocean. To celebrate the 150th birthday of the Stromness located boat, Highland Park released in January 1867 bottles of a special bottling, bottled at 55.9% (to reflect the 55.9 feet of the boat) : the Stromness Lifeboat Anniversary Bottling. Available only at the distillery for Orkneyingas, Highland Park gives a donation to the RNLI for every bottle sold.

Color : kind of like a claro Havana.
Nose : impression of a banana bread coming out of the oven. It’s rich AF. I feel a little bit of ground ginger giving an extra kick.
Palate : the typical peat of Orkney is expressed here in tobacco and roasted cereals. Then comes notes of leather, old sherry and dark chocolate.
The texture is thick without being oily and fills the mouth with a kind of velvet cushion.
Finale : a finish only in the mouth, with a long aftertaste of Orcadian peat very wet. Virtually nothing along the oesophagus apart from a few spicy notes that quickly fade.
Comments : well, the concept is pretty cool. A bottle created specifically to celebrate rescues on the high seas, it attracts me already. Add the concepts of the alcohol level that matches the size of the boat and the number of bottles that of the birth of the RNLI Stromness, and we quickly understand why it was so popular.
But beyond marketing, we are entitled here to an excellent whisky. Without being exceptional or as complex as other bottlings from the same distillery, this whisky has a well defined profile, who knows where it is going, without being aggressive. For me, it is a bottle that I could drink in one evening as it’s good and pleasant.

I’ll let you go with a souvenir of the Kirkwall RNLI boat from my Orkney trip this Summer ! 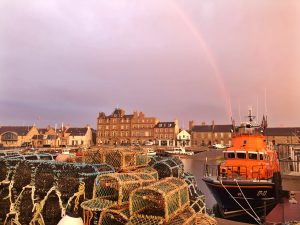