It’s been a little over a week, the glasses have been washed, the bottles emptied and all other remnants of the scotchtime Vegas Edition have been cleared away. Leaving all that attended just the photos and amazing memories. I was lucky enough to be invited by Eric, aka ScotchAndTime, as I know you’ve probably seen on Instagram to his wonderful whisky events.
This one bursting with highly sought after brands and brand ambassadors, Dalmore, Macallan, Whistle Pig, Brenne, Glenmorangie, Freeland Spirits , Scotch Malt Whiskey Society, and then some all poured into a suite atop of the Aria hotel.
Walking into a crowded hotel room full of brand ambassadors and whiskey influencers I was gushing! Beautiful artists like Linh from Whisky Anorach, boss babe whisky reviewer Jenna from Whisky A Go Girl, and the ever so coveted Whisky And Donuts – accompanied with donuts of course kept me stoked just to be there. Starting off the night with a negroni included any boss woman Molly troupe from Freeland Spirits. I must say, as a non gin drinker, I caved in and seriously enjoyed it. While sipping on my drink, I turned to my left to listen to the ever so creative Ernie button ( if you haven’t seen his work look it up) photos taken of the dried up bits of scotch at the bottom of a glass, sounds boring ? Think again, you’ll be immersed in a photo, believing it to be a space picture of some planet. Now I turn to my right to listen to the ever tenacious and enthusiastic Allison Parc of Brenne Whisky, and while I’ve listened to her speak about her whisky via live stream nothing beats hearing her words in person. After the presentation of Brenne estate cask and Brenne 10, we dig into boxes filled to the brim of donuts for a fun photo contest. The rules ? Grab something Brenne ,a donut and just have fun.

Okay now off to Bavettes Steakhouse so the whisky to flow freely. Oh the pours there were Whistle Pig , Farm Stock and the prerelease of Boss Hog V, fun sneak peak at what will be hitting the shelves in November. Macallan Rare Cask black and NAS Edition 4 , Highland Park (The Dark, 30 year and Gotham). Glenmorangie Signet and the 1989, to keep this scotch parade going, Ben from SMWS brought the peat and a laphroaig 27 year.

Not just the whisky brands stole the show barrelraised donated the glencairn glasses adorned with the infamous Vegas sign on one side. 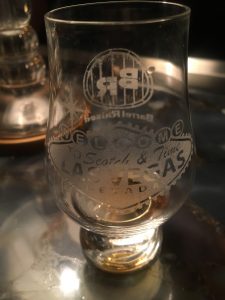 As well Alan or better known projectcarbon.us bringing in some cigars ,naturally, and showing off his gear. 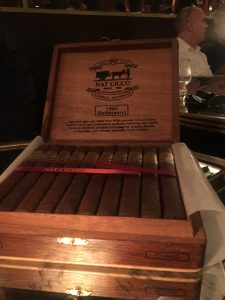 Although to be honest, it was the people that made this event. Whiskey influencers from all over the states : fromwhereidram and her husband deadscotch , wateroflifewhiskey, scotchminisz, whiskyattic, scotchnsniff, and so many others ! All with the same love and passion for whiskey and whether they have 200 or 220k followers you couldn’t tell the difference every person invited was humble, sweet- and totally badass. Only August will tell what the next event will unfold.